This is the first in a series of planned re-releases of level sets for Rocks’n’Diamonds, to make those level sets easier to install and play, and to add features and other stuff that may have been missing in the original releases by their authors. 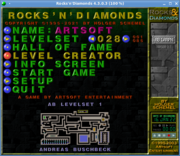 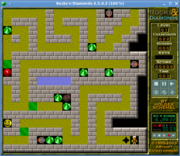 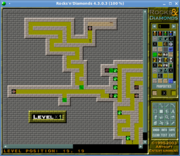 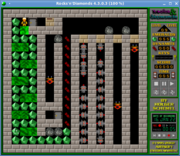 However, not only is his web site down for many years now (and the broken link to it on the “Levels & Artwork” page has been replaced with a link to the last snapshot of his web site on archive.org), but also his level sets with custom graphics, sounds and music were scattered over many different packages, which made it a bit complicated to install and play them in Rocks’n’Diamonds.

For a more convenient user experience, all level sets, graphics, sounds and music sets have been put together into one single package, which can easily be installed and played. As an extra bonus to the already released four level sets, an additional, previously unreleased fifth level set (“AB Levelset 0”, which is more of a prequel level set to the other four sets) with 80 levels and different graphics, created in 2002, has been added to this collection, which also contains solution tapes for all included levels.

You can download Andreas Buschbeck’s level sets here or from the “Levels & Artwork” section!